You Should Leave Your Church 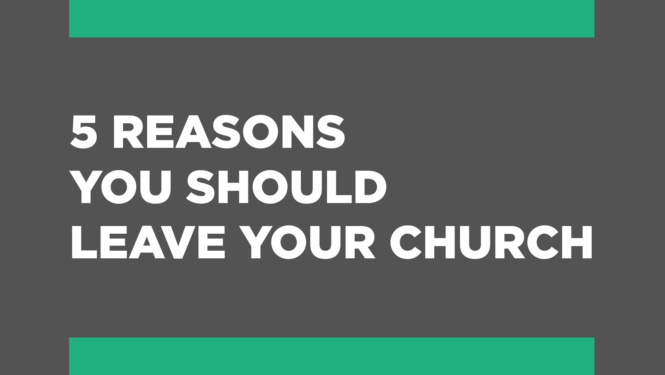 The church is a group of people not a place. That is what Jesus meant when He said He would build His Church. He spoke of a group of people who believed that He was the Christ, the Son of the Living God. The church is God’s plan A on changing the world and there is no plan B. Throughout the New Testament, we find that a believer’s interaction and involvement in the local church was something that was never regarded as optional. The church wasn’t something they did or something they went to; it was who they were.

There are good churches, there are bad churches, and there are churches that fall in between. If being engaged in a local church isn’t optional for Christ followers, then the big question that looms is which church one should engage with. There are many ways to answer this question, but in today’s content we concentrated on how good churches think about sin and respond to those who sin in much the same way that Jesus did. Bad churches, on the other hand, tend to respond to sin and react to those who sin in much the same way as the religious establishment of Jesus’ day. There was a stark difference in how Jesus talked about sin, spoke about sin, and responded to those who sinned compared to that of the religious establishment. In this message we learned that what we think of when we think of sin and how we feel when hear about or see sin is very important and very telling.

The Letter Vs. The Spirit

Good churches and bad churches can both believe the Bible. If you ask them
they would each say, “Of course we believe the Bible.” Throughout the gospels, we find that
both Jesus and the Religious Establishment believed all the parts of the Bible. However, they
disagreed about what point they believed the Bible was making. Both groups believed in the
inspiration of the scripture, but the real issue was that they had drastically different
interpretations and applications of the Bible based on what they believed was most important in
the scripture.

The Religious Establishment of Jesus’ day operated itself in a culture of labels,
classifications, and categories of people with assigned values. Those noticeably imperfect were
left out and left behind. The Temple, which was the epicenter of Jewish life and faith, reinforced
this hierarchical way of life. Gentiles and half-breeds were only allowed in the Outer Courts,
Jewish women could go beyond the partition to the Court of Women, Jewish men could go
further still, priests operated in the sanctuary, and the one priest, the great hight priest, would go
once a year into the Holy of Holies. It was into this world that Jesus entered and introduced
grace. It was this grace that turned the Religious Establishment up on its head. Jesus loved
people with uncompromised truth and unconditional grace, and it took the world by storm.

Jesus took a personal interest in individual people. Jesus reminds us that it is
indeed hard to hate up close. However, it can also be hard to love up close. Up close we tend to
see the blemishes, the inconsistencies, the shortcomings—all the things that can make it a
challenge to love someone. That’s why Jesus prayed in the garden for his followers to be one.
He prayed that they would love and serve one another in such a way that the world would
believe their message. This prayer is perhaps the only prayer that believers have the capacity to
answer on Jesus’ behalf.

You read through the gospels and it couldn’t be any clearer—Jesus built bridges to those who
had been overlooked and left behind. He touched the leper, hung out with the tax collectors and
sinners, he talked to Samaritan women, and he made hated minorities the heroes of stories he
told. He did favors for Roman Centurions, who were the instruments of Roman oppression. He
didn’t play politics, He wouldn’t answer every question asked of him, and he didn’t take a public
position on everything. He fed people. He healed people. He taught them in such a way that
they understood what He was saying. He built bridges. He said things like, “follow me,” instead
of listing prerequisites or telling them to stop what they were doing.

The Religious Establishment had 613 rules that people had to keep. It was nearly impossible to
follow all of those rules, especially if you had a job. They had created different categories of
people to determine who was in and who was out. If you were Gentile? Out. Tax collector? Out.
Samaritan? Out. Leper? Out. Shepherd? Out. They built barriers. They looked at Jesus and
thought he made it too easy, too simple. Jesus looked at the Religious Establishment and
concluded they were making it unnecessarily difficult for people to turn to God.

Throughout this series we have been talking about the fact that Jesus and
The Religious Establishment looked nothing alike, acted nothing alike, talked nothing alike, and
treated people nothing alike. When left unchecked, we tend to act like The Religious
Establishment. However, our job is to look and act as much like Jesus as possible. If we are
going to get this right and reach our potential as a church, we need you. Jesus invites us to
follow, but he doesn’t promise that following will always consist of what we want to do, have time
to do, or think is convenient to do. Jesus knew that if we are going to do our part and are going
to fully engage, we are going to have to surrender parts of our life.