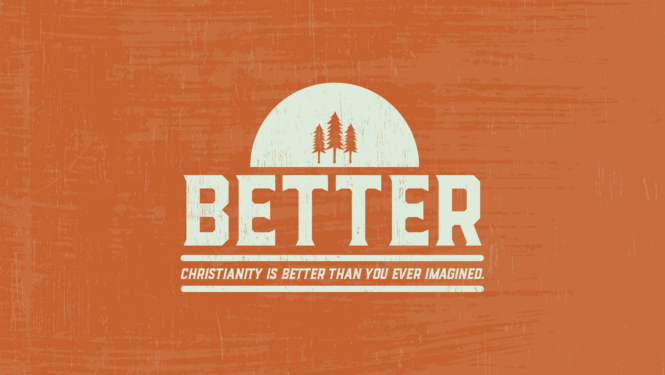 Something New and Better

A little over fifty years ago, 97% of Americans professed a belief in God. Compare that to today, and you will find that we live in a vastly different world.

We live in a culture that is increasingly apathetic towards God and matters of faith. More and more people are looking at Christianity and walking away, looking at the church and finding a resistible group of people peddling a resistible presentation of God. There is an increasing number of people who believe that their lives will be better without faith.

For over 1400 years God’s people were defined by “the law” a rigid set of rules designed to set Israel apart as a holy nation and neatly sort people into categories of “clean” and “unclean.” When Jesus came on the scene, He established something new and something better. He came to fulfill the Old Covenant so He could establish a better covenant, an agreement between God and all mankind on the basis of Jesus’ obedience and sacrifice. This new, better covenant was a covenant defined by grace.

Jesus would do away with the religious system. He would fulfill the law and establish something better: a covenant, an agreement with the world, established by Jesus on the basis of grace. Jesus would create a new system which was free from the law, the rules, and the checklists of the Old Testament. Because of Jesus there are no laws to keep, only a love to give away.

Jesus came to give us better. A better life, a better hope, and a better covenant. He established a new agreement with the world that revolutionized our relationship with God and with one another. It was an agreement, a covenant, founded upon one word: Grace. Grace doesn’t lower the standards. Jesus established the New Covenant and its one law: “Love one another as I have loved you.” This law is far more demanding than any contained in the Old Testament. But grace didn’t stop there; it also provided the power to follow this new law.

Jesus introduced something entirely new to the world. He fulfilled the Old Covenant based on law and introduced a New Covenant based on Grace. He retired the laws and rules of the Old Testament with the singular rule of the New: Love. He set people free from the enslaving power of sin and empowered us to walk according to the Spirit. Jesus changed everything, including the way we see people and sin.

The book of Exodus tells the story of when the Hebrews were made to be the slaves of their Egyptian neighbors. For hundreds of years God’s people lived under the heel of Egyptian oppression and tyranny, and for hundreds of years they cried out to God for their freedom. God sent Moses, the exiled adopted royal prince of Egypt (who happened to be a Jew), and used him to deliver his people from their captivity. The Jews marked their liberation with a festival called Passover. For lack of a better term, it became their freedom festival, their Independence day. But when Jesus came He changed everything, including the meaning and scope of the Passover festival. It was no longer about the freedom of a nation but about a freedom offered to the whole world. It was about freedom, not from government oppression, but something bigger and better than that. Freedom for you and for me that was purchased at a high price. With His life, Jesus gave us something better. With His life, Jesus gave us freedom from sin and forgiveness of sin.